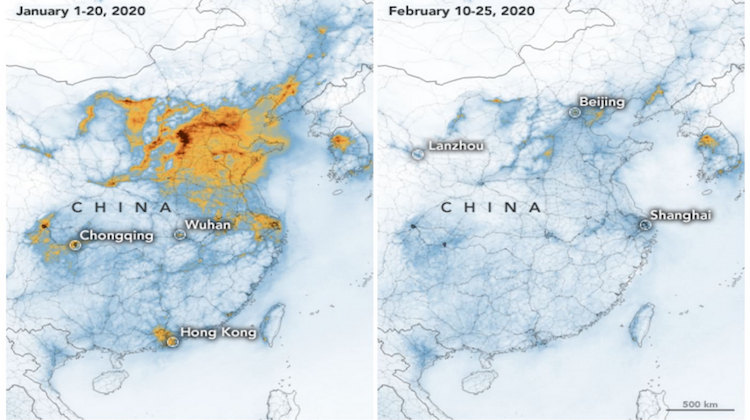 Using pollution monitoring satellites, NASA measured the air’s concentration of nitrogen dioxide (NO2), a gas that ends up in the air from burning fuel, primarily from cars, trucks, buses and power plants.

From January 1 to 20, and February 10 to 25, researchers saw a “significant decrease” in pollution over Wuhan and the rest of China due at least in part to an “economic slowdown” resulting from the virus outbreak, according to a NASA release.

The maps above show the density of NO2 concentrations in blue, yellow and orange across China during those time periods. The reduction started in Wuhan, and then spread to the rest of the country, according to NASA.

“This is the first time I have seen such a dramatic drop-off over such a wide area for a specific event,” Fei Liu, an air quality researcher at NASA’s Goddard Space Flight Center, said in a NASA release.

Typically, there are lower levels of NO2 in China around this time of year, as many businesses and factories close for the country’s Lunar New Year celebrations. The maps below illustrate how the NO2 concentrations (in blue, yellow and orange) dropped during the 2019 Lunar New Year festival, and then rose afterwards when business resumed. 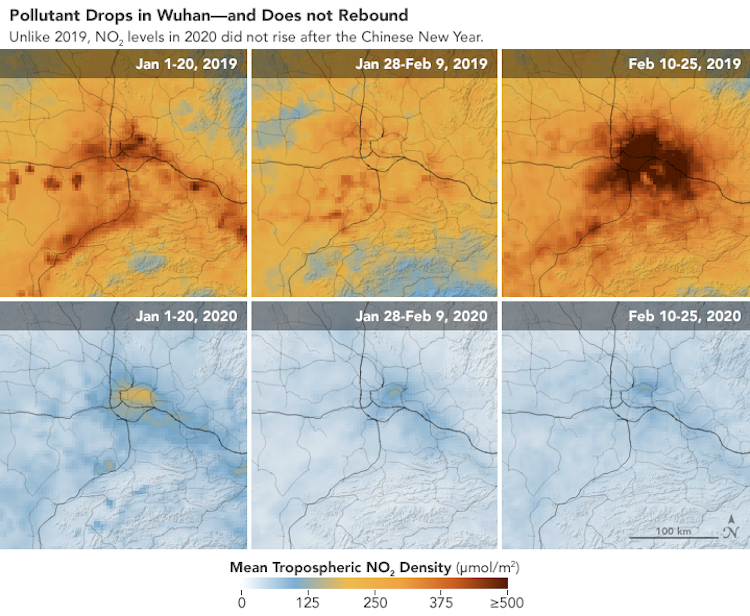 Experts attribute the difference to quarantine measures that have been implemented to stop the spread of coronavirus.

Millions of people in China have been on lockdown since late January, and many factories in the country closed due to the outbreak. In Wuhan, the capital of Hubei province where the virus originated, people have to follow strict guidelines for leaving their homes and are subject to temperature checks to go shopping for groceries. In early February, Beijing officials announced that all residents who were returning to Beijing would have to quarantine themselves for 14 days.

Travel bans around the world were put in place to prevent the further spread of COVID-19. The Centers for Disease Control issued a “level 3” travel warning for China, Iran, Italy and South Korea, meaning people should avoid all nonessential travel to these countries.

“The impact of unprecedented quarantines and restrictions on travel have brought the Chinese economy right now to a virtual standstill,” Stephen Roach, a senior fellow at Yale University, told CNBC’s “Squawk Box” on Friday. Indeed, there has been a decrease in coal consumption and transportation traffic, he added.

Empty Nesters – Selling Your home – Avoid these 9 Mistakes Is it time to downsize or to move into ... END_OF_DOCUMENT_TOKEN_TO_BE_REPLACED

The Barn, a few years away from it's 100th anniversary sits in the heart of Clarkson, ... END_OF_DOCUMENT_TOKEN_TO_BE_REPLACED

It's no wonder the Lakeshore bike path is one of the best in the GTA. It weaves along Lakeshore Road ... END_OF_DOCUMENT_TOKEN_TO_BE_REPLACED

COVID-19 has had a large effect on all of the world, including real estate. As a real estate agent ... END_OF_DOCUMENT_TOKEN_TO_BE_REPLACED

No Made in China